Our network of local branches are very much a part of their local community and regular charity and fundraising events are held.

In addition to supporting known charities, including The Donna Louise Trust and Birmingham Children’s Hospital, we also support smaller, local charities. This includes raising money to help provide specialised equipment for those with specific needs.

Our company owner, Suzanne Trippett will be cycling 300 miles in 4 days London to Paris for Birmingham Children’s Hospital Charity because “that’s where my wonderful son was treated”. 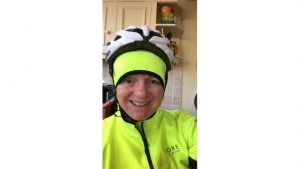 In her own words…

“As most of you will know, Ali was diagnosed with osteosarcoma in his leg when he was 13 and he was treated at Birmingham Children’s hospital. We are very fortunate to say that he has now been clear of cancer for 8 years.

So, now is the time to get my butt on the road and cycle some 300 miles in 4 days and raise some cash for Birmingham Children’s Hospital; it’s the very least I can do (as I don’t plan to step foot in the place again).

To make as much of a difference as possible, I will be covering the cost to enter the event so every single penny donated will go directly to the charity.

Ali has just turned 21 and for almost nine long years, he has had multiple operations, a myriad of infections, debilitating chemotherapy and radiotherapy, numerous trips to numerous specialists at numerous hospitals, cancelled holidays and disappointing medical updates. What touches me is that I have never once heard him complain about his situation. The night time emergency dashes to hospital, the news that he has yet another infection, the times when his mates went off to football and rugby without him…Ali kept on smiling.

The treatments and the pain he has been through may have been too much to bear at times and my God, he has been through months and years of agony and disappointments. But a few days of pain on a bicycle saddle is nothing compared to what Ali and others like him have to endure.

It was Ali himself who gave me the inspiration to do the cycle ride which I will be completing with my cousin, Liz. Unable to play football or rugby or ski like he used to before his cancer, Ali took up road cycling. And, as is his style, he gave it 100% effort and now is a keen mountain cyclist with a specially modified bike.

Please keep us motivated. Please support us on Just Giving and help us help more young people like Ali who were dealt some bad luck, but thanks to the fantastic staff and facilities at Birmingham Children’s Hospital, are battling their cancers – and winning!”

We are delighted to announce, that Suzanne completed the challenge and also raised a staggering £11,187 for Birmingham Children’s Hospital!!!

Alistair Trippett has raised a phenomenal amount for charity currently £3,000 to the British Heart Foundation and £2,000 to Cancer Research, Alistair tells us his story in in his own words.

In June 2009 I was diagnosed with bone cancer in my lower leg at the age of 12. In December that year I had already undergone major surgery to remove the tumour and a 6 month course of chemotherapy, the disease had gone.

If it were not for significant research having taken place over the last two decades, I and many others would not have been treated and would’ve have been given an expected date to live

It is because of what this research has given to me, I feel it is only right to give something back. That is why on the 28th of September 2013 I am participating in a sponsored ride from Oxford to Cambridge. A painful 88 miles will require me to bust a gut for a minimum of 8 hours. It is a very ambitious target for any intermediate cyclist but only being able to fully function with one leg will make it all the harder.

We are please to inform you that Alistair completed the cycle challenge and no doubt will go on to achieve further success!!!

What a success!!! A big thanks to all of you that were involved in the Macca’s Project bonfire and firework evening. This is a special charity that was set up by the McCauley family after Tom McCauley took his own life aged just 19 years old.

The Maccas Project is specifically aimed at supporting young men’s mental health in the North Staffs area. It is the only local project currently in existence focusing solely on our young males (14-25 years of age) with mental health issues.

Young people prefer to ‘suffer in silence’ because they are scared of stigma, or feel that they would be treated badly if they told someone about their problems.

43% of young people said that fear of stigma had stopped them seeking help.

Organisers managed to arrange a raffle of donated prizes from local businesses, which raised just over £1000, bringing huge awareness to the local area.  Friends and family produced a free feast of food, with fireworks and bonfire thrown in too!!

A special thanks goes out to Rachel Simpson for organising and hosting the event.

A massive thank you to the two AMG Donna’s for raising a whopping £2,777 for the Donna Louise Trust. Both Donna’s felt the cold after shedding their locks on January 17th 2014.

Donna Thorley spoke about why she decided to take on the challenge “I have been lucky enough to have three healthy children, but know there are a lot of families in the area who are not as fortunate, and without the support that the Donna Louise Trust offers, life would be a lot more difficult”

Donna Miller donated her hair to the ‘Little Princess Trust’

Suzanne Trippett owner of AMG Nursing and Care Services was on hand to provide support to the two Donna’s. Suzanne herself has supported this charity for many years holding various fundraising activities throughout the year.